I love avo eggs, and the sweet cantaloupe and savory zucchini strips really go well together. The zucchini strips need to be made a little bit ahead of time. I dehydrated mine just long enough to soften them, about two hours. These can be dehydrated overnight and put together the next morning.

Peel the zucchini and slice into very thin strips. This can be done on a mandoline slicer or with a sharp knife. In a small cup, whisk together the olive oil, agave, balsamic vinegar, salt, onion powder, garlic powder, and liquid smoke. Pour over the zucchini strips (a lidded container works well, I use a zip lock box). Once coated, lay the zucchini on lined dehydrator sheets and dehydrate at 105 degrees overnight, or until softened.

To assemble, just slice the cantaloupe and wrap with the softened zucchini slices. Cut the avocados in half, put a dollop of agave in the center, and sprinkle with a bit of salt and pepper. 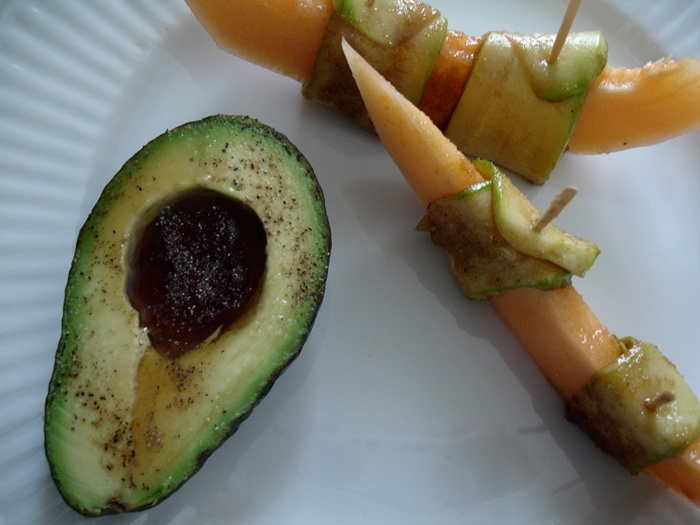 This marinara sauce tastes just like I remember Spaghetti-Os tasting. I haven’t eaten them in many years, so excuse me if my memory isn’t totally accurate. A little bit of sweetness is the trick, I think.

Puree the sauce ingredients in a food processor fitted with an “S” blade. Let process for a few minutes until very creamy (or don’t process as long if you like it more chunky, but it won’t be like Spaghetti-Os!).

Make noodles in your usual way from the zucchini. I marinated mine for about an hour in a tablespoon of the basil and oregano flavored olive oil from last week, with a bit of salt. Serve with the marinara sauce and a dash of basil and oregano. 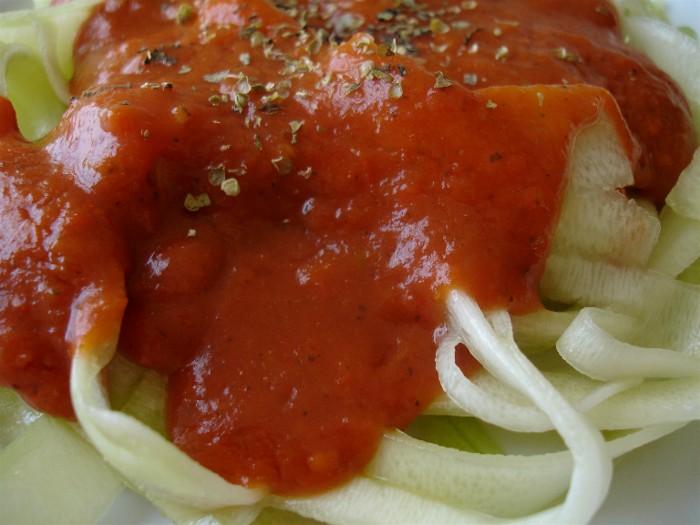 Wilted greens seem to be traditional in just about every culinary history. It’s sometimes thought of as a German or southern specialty. I like how the wilting process softens the greens just a little. The dish is usually made with greens that are wilted by pouring hot bacon and bacon fat over them.This recipe achieves the same goal in a healthier and kinder version.

To make the “bacon,” put the sliced zucchini and onions in a lidded container. Whisk together the olive oil, balsamic vinegar, agave, salt, cayenne, and liquid smoke and pour over them, coating well. Put the lid on a shake a few times, for good measure. Pour onto a lined dehydrator sheet and dehydrate for about two hours at 110 degrees.

Put the kale in a lidded container. Whisk together the olive oil, balsamic vinegar, agave, garlic, salt, and pepper and pour over the kale. Massage for a minute or two to evenly coat. Put the lid on and shake container every so often to recoat the kale. Let this marinate and “wilt” while the zucchini is dehydrating. Add the other greens for the last half hour, since they’re far more delicate than the kale.

Put the wilted greens on a plate and spoon on the zucchini “bacon” and any drippings. 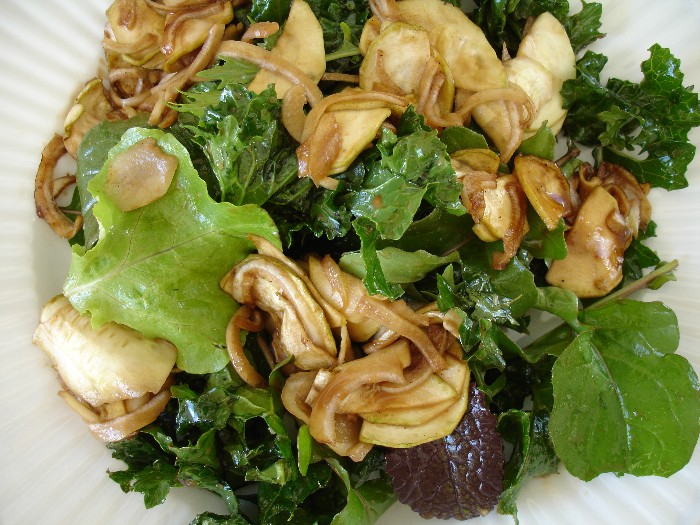 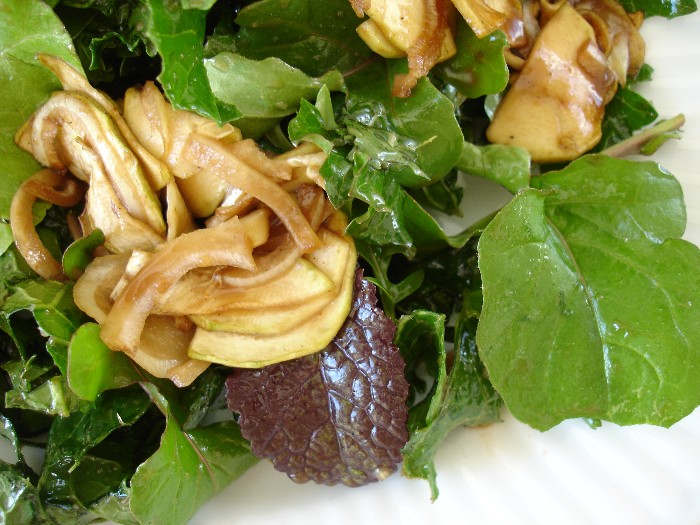 Dessert
Pizza Pie
serves 4 ~ $1.51 per serving
3/4 cup walnuts ($1.50)
3/4 cup raisins ($1.00)
1/2 cup cashews ($1.00)
1/2 cup water
1 tablespoon agave ($.10)
1/4 teaspoon salt
3/4 cup strawberries ($1.50)
2 tablespoons agave ($.20)
2 bananas, grated ($.30)
1 kiwi, sliced and quartered ($.45)
This
is such a fun dessert! To make the crust, in a food processor fitted
with an “S” blade, process the walnuts and raisins until they’re ground
up fairly well and start clumping together. Press into a dinner plate or
pie plate (or a small pizza pan!).
In
a bullet type blender, puree the cashews, water, agave, and salt until
creamy, which takes a few minutes. Once blended, pop in the freezer to
chill for a few minutes.
Again using a bullet type blender, puree the strawberries and agave until very smooth.
Using a food processor fitted with a grating blade, grate the bananas (almost unripe bananas work the best).
To
assemble, spoon a layer of cashew cream on the crust, spreading almost
to the edge of the crust. Spoon a layer of strawberry puree on top of
the cashew cream. Sprinkle the grated bananas over the strawberry puree
(the bananas will be a bit gooey, so it takes a bit of finessing). Top
with the cut kiwi. Let chill in the refrigerator for at least an hour
before cutting into pizza shaped wedges and serving. 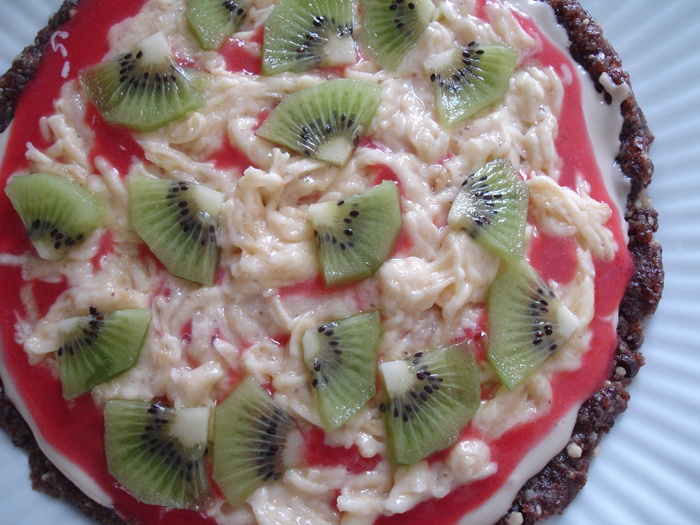 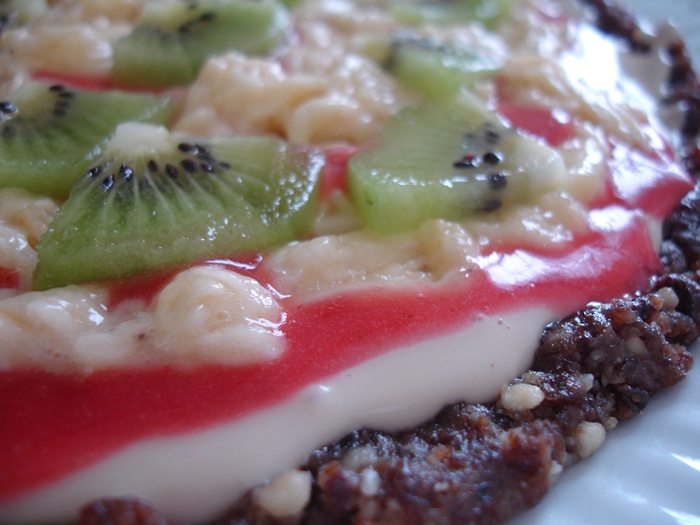