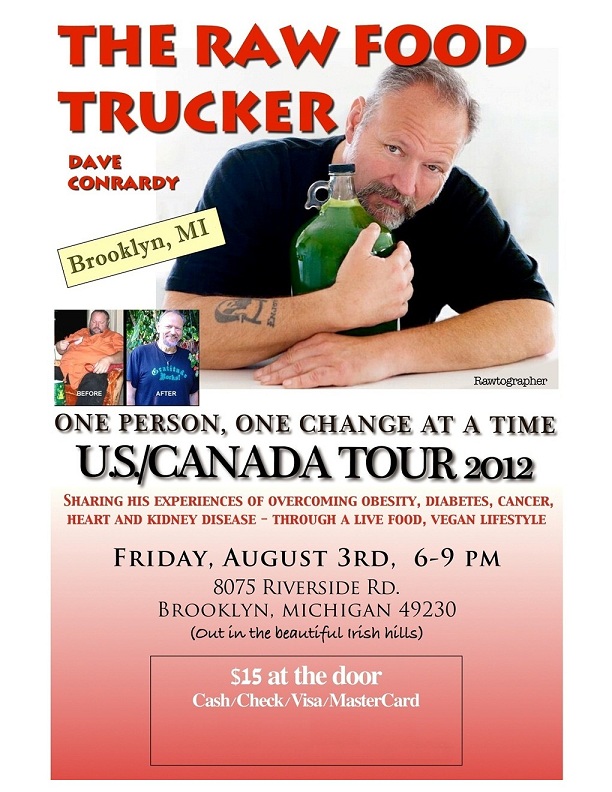 We’re proud to be hosting an evening with Dave Conrardy, also known as Dave the Raw Food Trucker.

“The
more I flooded my body with nutrients, not only did I feel better, but
my cravings went away,” says Dave.  “When I heard about veganism, I
didn’t believe it could be this powerful!”
Come meet Dave and hear his inspiring talk. He’ll be answering your questions after, and we’ll be enjoying a small raw buffet out of our organic garden.
Friday, August 3rd
6:00 pm to 9:00 pm
$15 at the door
Read more about Dave and his incredible transformation on his website, DaveConrardy.com

From “The Raw Food Trucker” by Beth Davis, printed in Natural Awakenings, July 2012:

Dave Conrardy knew that he was dying. He was 52 years old & weighed 430 lbs. He was eating 3 lbs of red meat & a bottle of antacids every day. For him, eating greens meant adding extra pickles to his hamburger. His diabetes was out of control, he had heart problems & his kidneys were leaking proteins. The only thing keeping him alive was his cocktail of 19 prescription & 6 over-the-counter medications.

Doctors told him insulin was the only answer, but he knew if he became insulin-dependent, he could no longer be a truck driver. With only a 9th-grade education, he did not see that as an option so he did some research. He discovered the book There is a Cure for Diabetes by Dr. Gabriel Cousens which outlines the benefits of raw food juicing. “I told my doctor to let me try this juicing thing,” recalls Conrardy. “He told me I had a week to turn things around. I thought there was no way it would happen, but on the 4th day, my blood sugar dropped. I was shocked.”

He began juicing fruits & vegetables at highway truck stops & rest areas & within 10 days, he was no longer taking antacids. Within 6 months, he was taking only one of his prescription medications. After a little more than a year, he had dropped a whopping 230 lbs.

He has adopted a 99% raw, organic & vegan diet & travels the world sharing his story. He no longer drives trucks, bur runs an e-book publishing company & coaches others on the benefits of eating raw. “I never would have believed this was possible, but it is the happiest time of my life. I’m so grateful to be alive that I want to show others the possibilities of the best healing diet on the planet.”