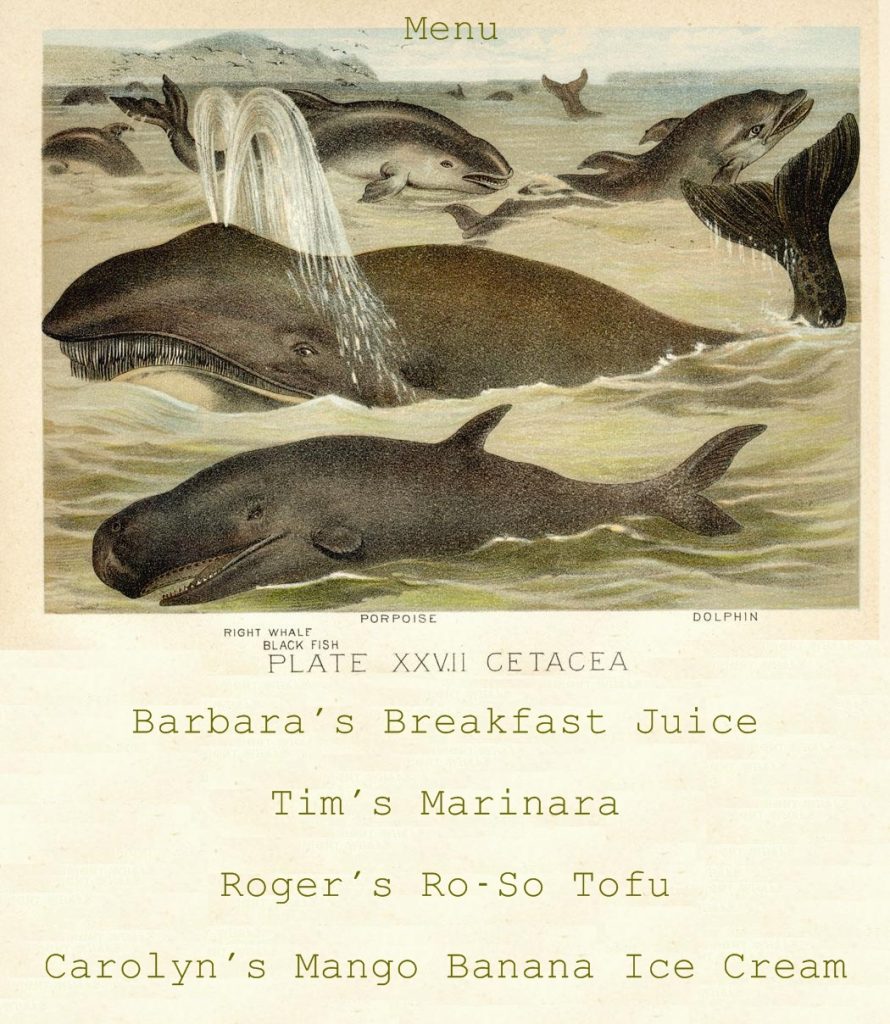 I’m doing something slightly different this week. I’m declaring it ARZone Week, here on Raw on $10, and I’ve asked some of my friends over at ARZone to contribute a recipe or recipe idea, along with something about why they’re vegan.
What is ARZone?
“Animal Rights Zone (ARZone) is a voluntary, grassroots, abolitionist animal rights social network created in December 2009 with the aim of encouraging rational dialogue in the animal protection movement through forum and blog posts, combined with videos and other features. The site is a social movement organization, specializing in running ‘live guest chats’ which are held weekly when prominent members of the animal advocacy community answer questions about a range of issues such as animal rights, animal welfare, political campaigning, violence, direct action, and conservation.”
“Through live online chats with a diversity of people who work both within and outside of the animal advocacy community, ARZone supports rational discourse and intelligent dialogue about the most pressing issues facing us today.”
ARZone guest chats have included Ric O’Barry  (The Cove), Captain Paul Watson (Sea Shepard), Dr. Will Tuttle (The World Peace Diet), Prof. Gary Francione, Bruce Friedrich (PeTA), Shannon Keith, Dan Cudahy, Lee Hall, Priscilla Feral, Shaun Monson (Earthlings), Colin Blakemore, and others.

Feel fee to join us! We’d love to have you!

Barbara DeGrande is an animal advocate and blogger at Veganacious.
“After being a vegetarian for many years, I became vegan after listening to some podcasts and learning about other aspects of the exploitation of animals. Over time, I learned there were so many reasons to remain vegan: the injustice towards animals, the violence and cruelty, the destruction of habitat, the waste of water, the degradation of water and soil; the presence of unnecessary hunger in the world, the deterioration of the human spirit.”

Juice all ingredients, and enjoy. 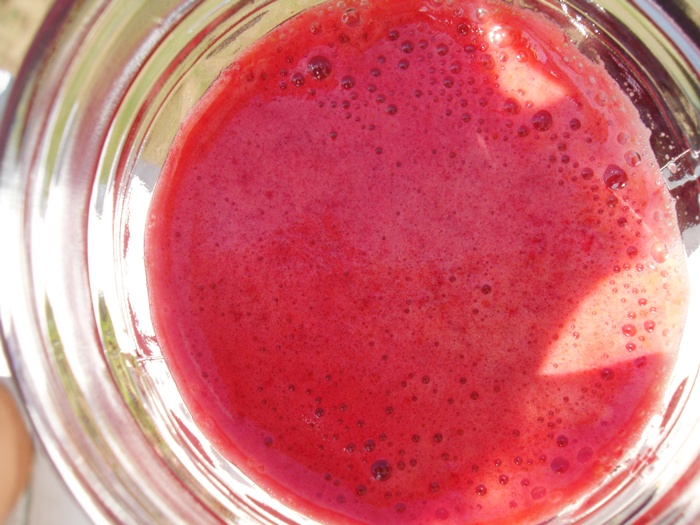 “Life is a continuum, a gradient upon which all beings lay, from the simplest single-celled prokaryote to the incredibly complex Homo sapiens. We are all connected. Somewhere along that gradient, and no-one knows where, life recognizes itself and becomes more than something which just happens to stay alive to some being who wants to stay alive. Because some other life forms are alive, because they want to be alive, because they act in ways to stay alive into the future, they have as much of a claim on their lives as I have on mine, as you have on yours. The least any of us can do then is to let all such beings live, as best they are able, as only they can see fit, as free from our interference, as far as is possible in this imperfect world.

“Becoming vegan is simply a way to show respect for the lives of others, which is something we all should aspire to, in everything we do.”


In a heavy saucepan, saute the carrot, onion, and garlic until just slightly tender. Add the chopped tomatoes (Tim says red and yellow grape tomatoes go really well in this), tamari, balsamic vinegar, and red pepper flakes. Simmer for another ten minutes while the pasta is cooking, adding a few fresh basil leaves at the end (or a teaspoon of dried). Serve over the pasta and with a salad (I used arugula) dressed with olive oil and red wine vinegar, and a nice, crusty bread. The nutrition information below includes the pasta, marinara, salad, and bread … the cost is for the marinara only. 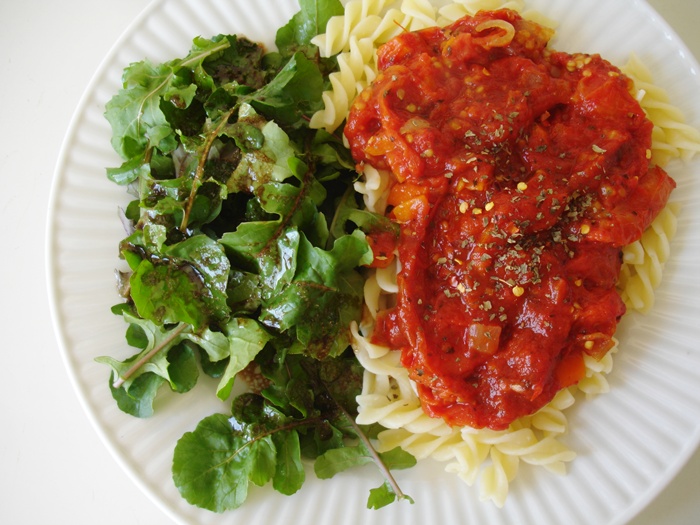 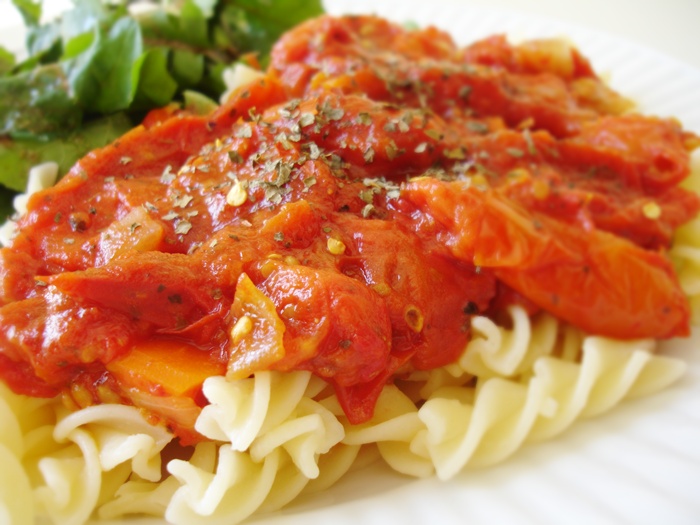 Dinner
Roger’s Ro-So Tofu
serves 2 ~ $3.95 per serving
Dr. Roger Yates is a sociologist, animal advocate, educator, and blogger. Also, here is an interview conducted with Dr Yates for the NSW Vegan Society 2011 Sydney Vegan Expo.
“Why I am a vegan.

“I have lived vegan since 1979. When I joined the Hunt Saboteurs Association (HSA) in that year (after a false start in 1977) I was exposed to the literature of the animal advocacy movement, some of which came from groups like the “farm animal welfare” organisation, Compassion in World Farming (CIWF). The prime movers in my “sab” group in Essex were, however, all ethical vegans. This coincided with news coverage of the Scottish seal cull (kill) when a sealer declared that the reason seals must be killed was due to them “eating all our fish.”

“The range of processed vegan goods, such as “nut milk” and “textured vegetable protein,” was extremely limited in England in the late 1970s, and my choice to live vegan was entirely a matter of animal ethics. I am and always will be very glad that I did not get involved in even a short “vegetarian stage” since I know several people who have not been able to escape vegetarianism even though they accepted the logic of the vegan philosophy and always meant to live vegan.”

Roger’s recipe contribution was a vegan version of mo-po tofu. I was missing some of the ingredients and so made this instead … something of an American “southwest” flavored tofu stir fry. A Ro-So Tofu, if you will.

Cut the tofu into 2 cm cubes, and slice the zucchini into 1/4 inch rounds. Add the tofu, zucchini, corn, olive oil, agave. soy sauce, and the remaining spices to a heavy skillet and stir fry until the tofu is lightly browned and the zucchini is tender. 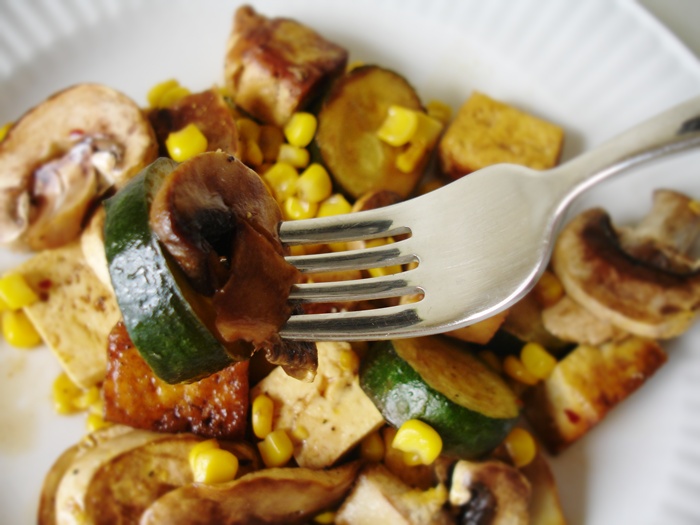 
Carolyn Bailey is the creator of ARZone, an animal advocate, super sweet lady, and organizer extraordinaire.
“Why am I Vegan?

“I’ve lived most of my life not understanding the relationship many people have with other animals. I could never understand as a child why some people felt comfortable eating some animals and not others. I always thought I was the only person in the world who felt this way, and that there was something rather odd about me.

“I became vegan because I couldn’t justify other animals having to suffer and die for my pleasure. I believe that living vegan is the most peaceful and natural way to live my life in order to respect myself and other animals, and to avoid harm to other individuals.

marigold petals, for garnish
Carolyn asked me to make a recipe that kids would enjoy. I think most kids would enjoy banana ice cream, I know my grandkids sure do … and it couldn’t be easier.


Slice the bananas and chop the mango and freeze. In a food processor fitted with an “S” blade, process the banana and mango until smooth and creamy. Add a touch of water for help with blending.


Or, you can process the unfrozen banana and mango in a food processor or blender and then put into an ice cream maker according to you maker’s instructions.

I added some marigold petals as a garnish. 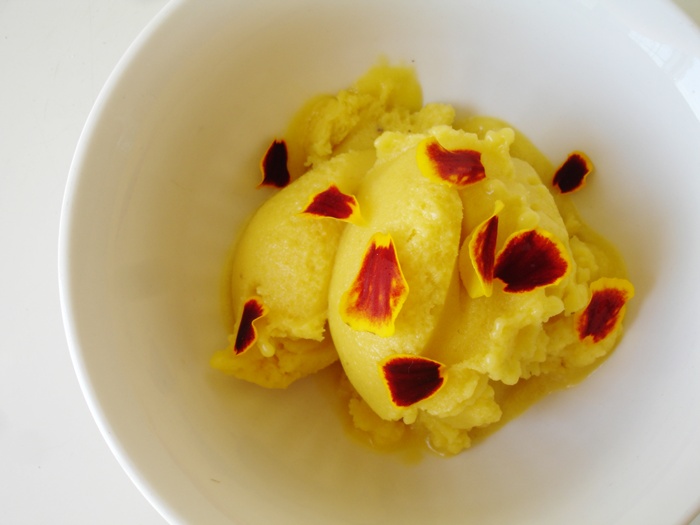 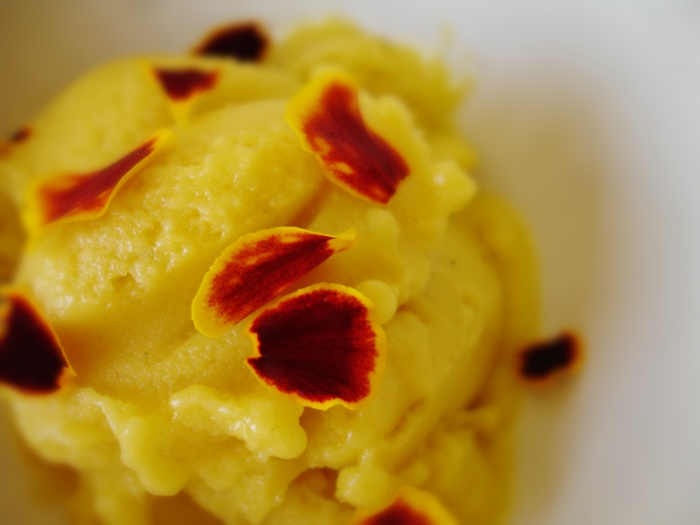 
I recently won the book, “Eating Animals,” by Jonathon Safran Foer, over at Bitt’s blog (thanks Bitt!). I’ve read it through and would like to pass it along to someone else. It’s an excellent book, although I wish he’d made a better case for veganism.


To enter, visit ARZone and let me know what you like about the community or find interesting.

For additional entries, just leave a comment below and/or answer the question of the week.

Question of the Week


Are you vegan? If so, why did you become vegan?