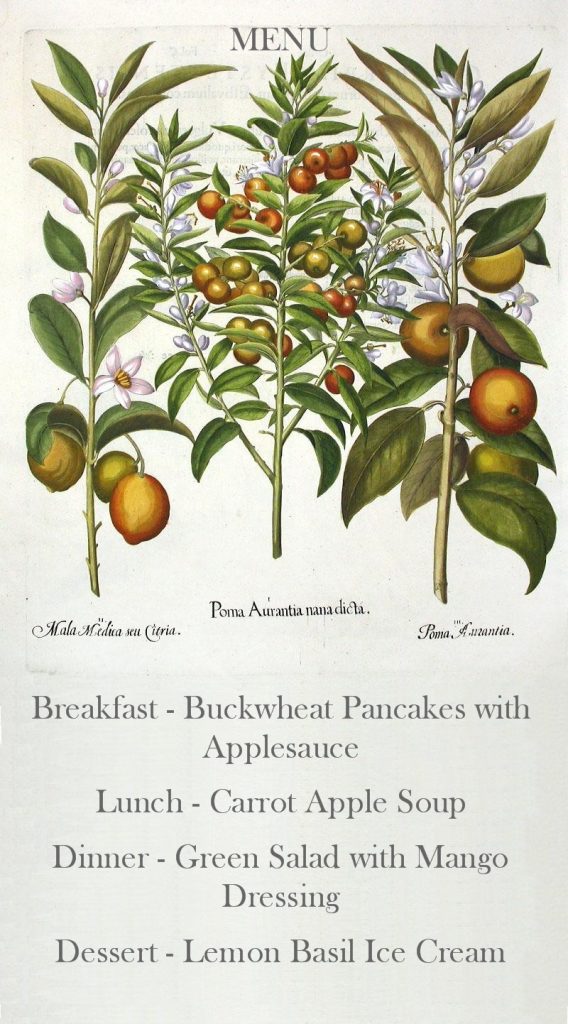 Breakfast
Buckwheat Pancakes with Applesauce
serves 4 ~ $.89 per serving
1 cup soaked and rinsed buckwheat groats ($.35)
3 bananas ($.60)
1/4 cup ground flax seeds ($.10)
1 tablespoon olive oil ($.10)
1 tablespoon agave ($.20)
pinch salt
2 large apples, peeled and chopped ($1.80)
2 tablespoons agave ($.40)
1/2 tablespoon cinnamon
raisins
I usually make nearly everything for this blog on Sunday, and more often than not have no idea what I’m going to make until that morning … and that’s how it is most other days, too. I’m just not much of a planner. I was feeling pretty uninspired this week, too. And, I was running low on lots of things, and running out of others. But that’s what’s amazing about raw and vegan foods; with just a few ingredients and the smallest amount of inspiration, good meals can be made.
These are similar to other pancakes I’ve made here, but heavier on the buckwheat. In a food processor fitted with an “S” blade, process the buckwheat, banana, flax seed, olive oil, agave, and salt until pureed. This takes about three minutes. Spread the batter out in 4 in rounds on lined dehydrator sheets and dehydrate for about an hour. When the top is “set” and dry to the touch, flip the pancakes and peel the sheet off them (I flipped mine too soon … and they were left with marks from the dehydrator). Continue to dry for another few hours until the outside is dried and the inside is still moist but not wet.

To make the apple sauce, in a food processor fitted with an “S” blade, process the apple, agave, and cinnamon until pureed and smooth. Stir in a few raisins and spoon over the pancakes. 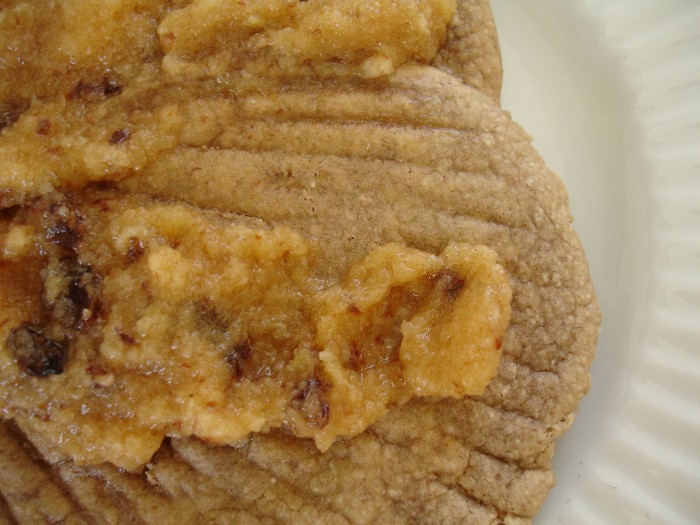 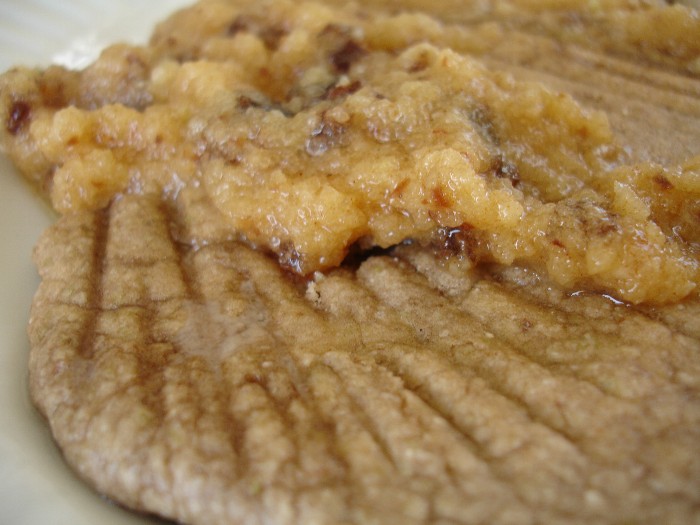 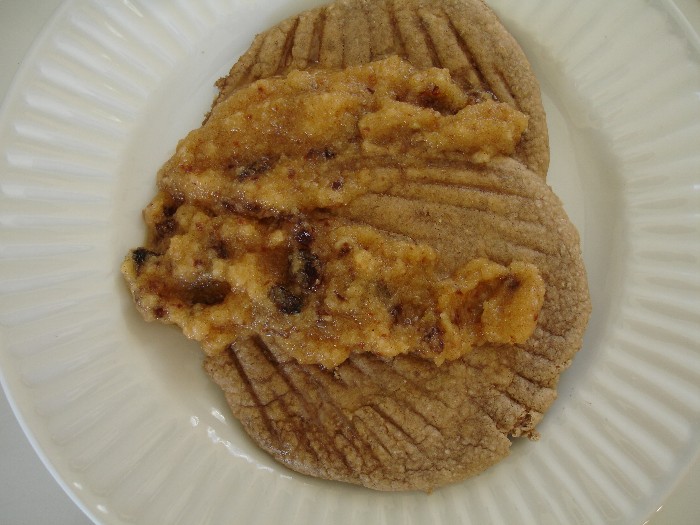 Lunch
Carrot Apple Soup
serves 2 ~ $2.01 per serving
6 carrots, chopped ($1.00)
1 tablespoon chopped onion
1 avocado ($1.49)
1 large apple ($.89)
1 red bell pepper, chopped ($.79)
1/2 teaspoon salt
1/2 teaspoon pepper
pinch cinnamon
pinch cumin
water for blending
This is a sweet way to take advantage of in season carrots and apples. Actually, it started out as a (rare) food experiment gone wrong … but it worked all out in the end.
In a blender, combine all ingredients and pureed until very smooth and creamy. Use as much as necessary for the desired consistency. This soup would be awesome in a Vita Mix or a similar blender, but any blender will work … although it may take a few minutes. If it’s not smooth enough, press through a wire mesh strainer.
Serve with a few bits of chopped apples and onions and a drizzle of olive oil. 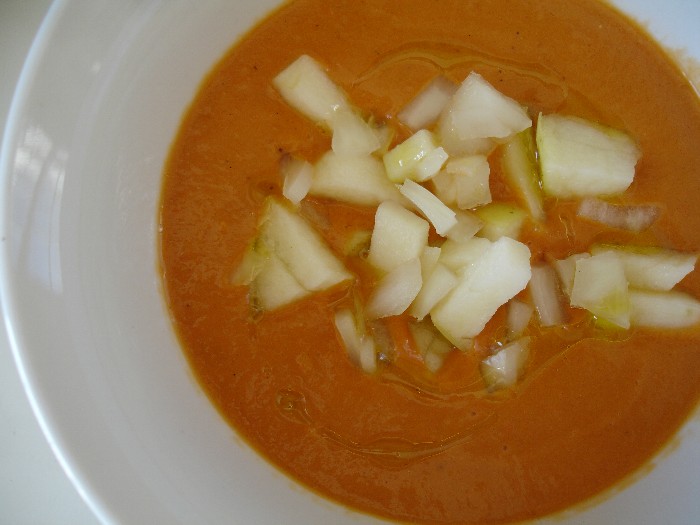 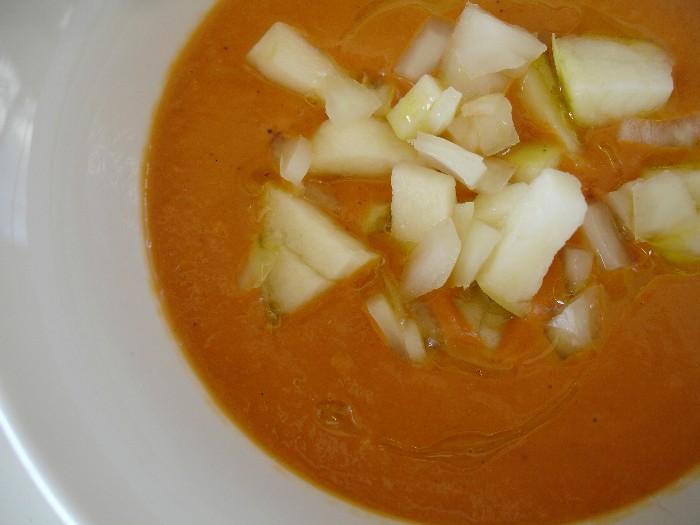 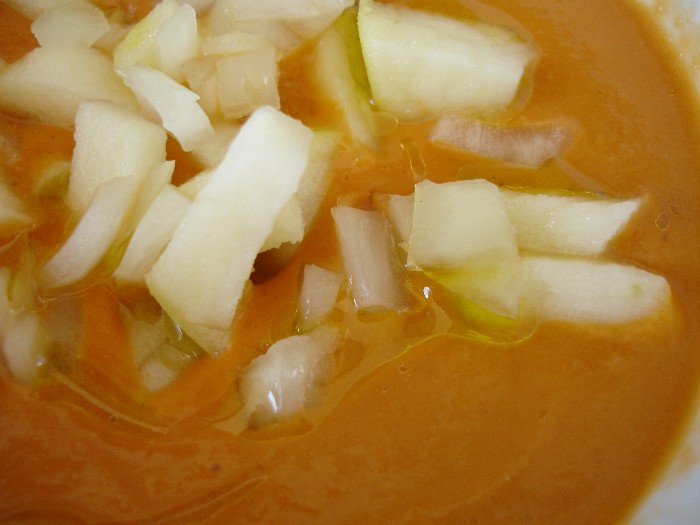 OK, mango isn’t in season. It’s technically never in season where I live. But, oh my, it sure is nice to have.

Combine all the dressing ingredients in a bullet type blender and pureed until smooth. (I use small canning jars with the blade assembly of my regular blender.)

Toss together the chopped romaine, chopped celery, chopped onion, and add some walnuts. Top with the mango dressing. 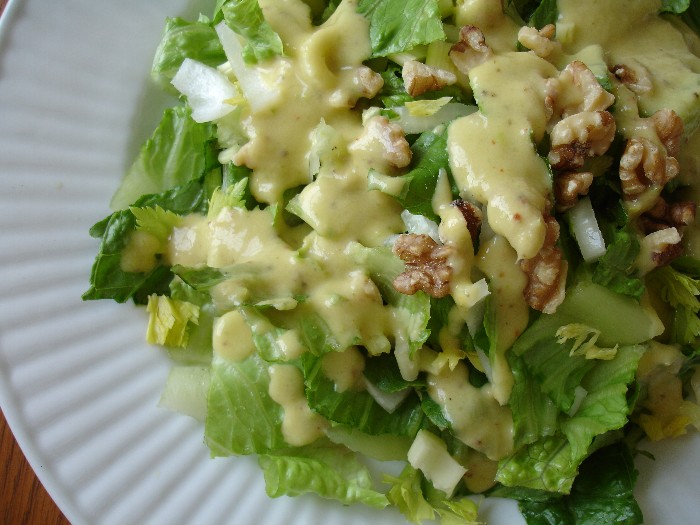 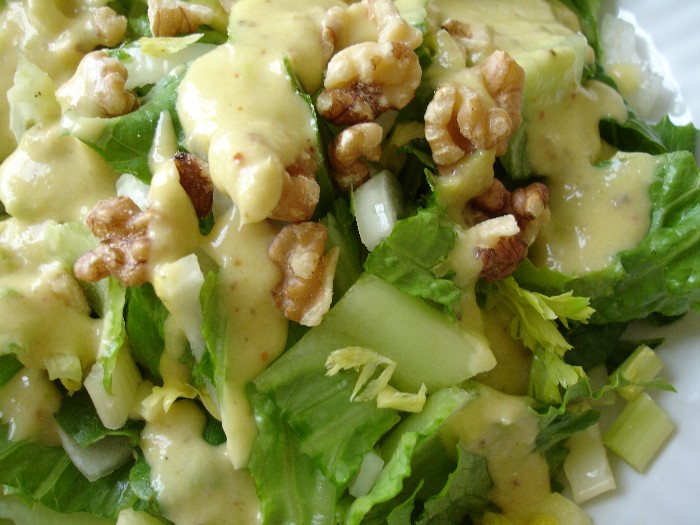 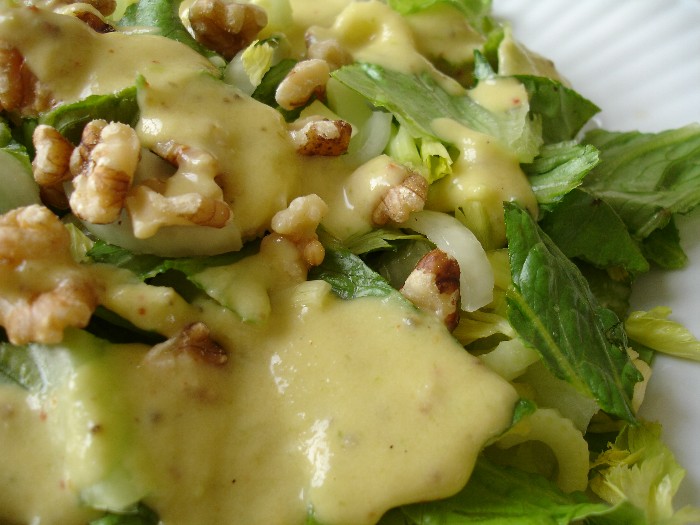 Dessert
Lemon Basil Ice Cream
serves 2 ~ $1.12
5 ripe bananas ($.75)
juice and zest of one lemon ($1.49)
1 tablespoon dried basil, or 3 tablespoons fresh
Yes, more banana ice cream. I do love this stuff and it really does seem to have almost endless possibilities. I think fresh basil would be better, but I used dried and it worked well to ad just a bit of flavor.
In a food processor fitted with an “S” blade, process all ingredients until the bananas are liquid. Then process in an ice cream maker until firm.

Total cost for the day: $5.57
total calories: 1,288
total fat: 61 gr
total carb: 182 gr
total protein: 21 gr
***
Product Reviews
Crazy Rumors Lip Balm
I LOVE lip balm. I think I may be addicted to the stuff, and have always needed it since my lips seem to stay perpetually chapped. I’ve been a big fan of Crazy Rumors for a few years at least. Alternative Outfitters carries their products and I’d purchased them before, so I was happy to try them again. It’s hard to find a truly vegan lip balm that works as well as something like Burt’s Bees (which contain not just bees wax, but lanolin as well), but these come really close and the flavors are many and delicious. At $4 a tube, they’re just a bit more expensive than some others, but they have staying power so last a while. Also, they’re totally vegan and use all natural ingredients.
B12 Patch
B12 is something everyone risks being deficient in … not just vegans. And oral B12 is notoriously hard to absorb. Vita Sciences makes a B12 patch now. I haven’t had my B12 levels checked while using this product, but it’s easy to use and the idea makes sense. The patch is discreet and placed on the neck near the ear. I had a tiny bit of mild skin reaction to the patch the first time I used one, but I’ve got several allergies and I was kind of expecting it. One box, which lasts 60 days, is $24.95.
***
Question of theWeek
Do you use supplements? (In addition to B12 and vitamin D, I just started using a one-a-day made by Deva)
Share